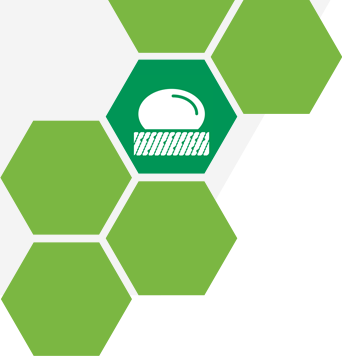 Metallographic cross sections are suitable for characterizing layers and layer systems. Using such a destructive analysis method, single and multilayer systems are evaluable with regard to layer thickness, adhesion, porosity and defects in layers.

Another field of application for metallographic cross sections is structural analysis. So, important information can be obtained like determination of filling degree or micro hardness in addition to classical microstructure analysis.

INNOVENT has modern technical equipment for the preparation of metallographic specimens. This enables the production and analysis of appropriate test specimen, starting with sampling, via cold and warm embedding processes with various resins and the corresponding grinding and polishing steps.

For example, the following tasks can be processed:

In general, corrosion is defined as dissolution or conversion of a mostly metallic surface or metallic material. The corrosive component is in contact with a conductive liquid from the environment (electrolyte), often of an aqueous nature, leading to the formation of a so-called corrosion element. In this element, various redox reactions take place, forming a circuit consisting of ion currents through the electrolyte and electron currents in the material.

Electroanalysis enables the detection and evaluation of occurring electron currents. Therefor the metals or their alloys to be examined are placed in an electrochemical measuring cell and brought into contact with a corresponding electrolyte. Subsequently, various corrosion processes are simulated and accelerated by applying a potential (potentiostatic) or a current (galvanostatic). The resulting correlation between voltage and current or current density is referred as current density-potential-curve. Depending on the selected parameters (metal, pH value, temperature, nature and concentration of the electrolyte), these plots show a characteristic curve progression and provide information about present corrosion mechanism. By means of a final numerical evaluation of the experiments, data is obtainable on open circuit and passivation potentials, corrosion marks such as pitting, corrosion currents and rates as well as polarization resistances.

The equipment at INNOVENT with various potentiostats and galvanostats as well as numerous measuring cells is used for research work on interesting metal-electrolyte systems and thus enables an estimation of term and corrosion tendencies or is used as quality control of customer-specific systems.

Particularly, electrochemical impedance spectroscopy is suitable for analysis of material properties and the characterization of surfaces and their coatings. This method is based on the determination of alternating current resistance of an electrochemical system consisting of the sample to be characterized and a conductive electrolyte solution. After applying a frequency-dependent alternating voltage or alternating current to the corresponding sample, the phase and amplitude shifts of the respective current or potential response are measured and plotted. Subsequently, the analysis takes place via interpretation of the various plots (Bode, Nyquist) together with creating and fitting a theoretical equivalent circuit to display possible chemical and physical processes.

Impedance spectroscopy is an especially sensitive measuring method that can be performed non-destructively by selecting the examination parameters. Therefore, it is used in a wide range of applications. At INNOVENT, the research of organic (lacquers, paints, polymers) and inorganic coatings (passive layers, oxides) on their quality and corrosion protection performance (swelling properties, adhesion, delamination, number of layer defects) is of most importance. Further interesting topics include research on batteries and fuel cells, photovoltaics and surface-bound biological systems.