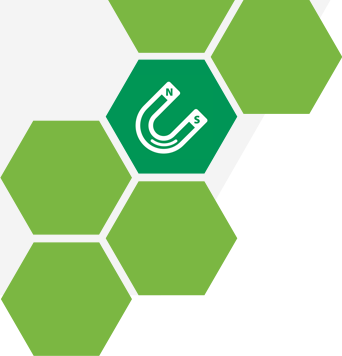 Magnetorheological fluids (MRF) are dispersions whose viscosity can be controlled under the influence of external magnetic fields. This effect is produced by homogeneously distributed particles of magnetic material in the carrier liquid, which under the influence of a magnetic field align themselves in a chain in the direction of the magnetic field lines. Shear forces acting perpendicularly to the magnetic field lines are thereby increased, whereby the increase can go over several orders of magnitude. The increase in shear forces corresponds to an increase in the viscosity of the dispersions. With regard to the composition of the dispersions, this effect is primarily dependent on the core particle size of the magnetic particles. Magnetorheological fluids are mainly designed for use in dampers, clutches, engine mounts and brakes.

Carbonyl iron particles with a diameter of 1-5 µm and a weight share of 30-80% form the basis of our MRF. Depending on the application, silicone or synthetic oils are used as carrier fluids. To increase the sedimentation stability and adjust the basic viscosity, various structure formers are used.